Tigual Trio consists of guitarist Tim Panman, violinist Gustavo Cabrera and double bass player Alexander Vocking.
They met each other in the conservatory of Rotterdam, Codarts, where they specialized in world music, their focus being Argentinean tango.
This international blending of musical traditions turned out to be an ideal foundation for the broad interests of this trio.
In 2015 they decided to join forces and created a trio that clearly shows their many different influences. A wide variety of colors can be heard: Argentinean tango and folklore, gypsy-jazz, classical music and flamenco.
With craftsmanship and joy they bring a diverse program full of beautiful music, centered on the guitar, violin and double bass!

Tim Panman is a guitarist specializing in Tango, Flamenco, Classical and South-American folkloric music.
He completed both his bachelor’s and master’s degree at the Codarts conservatory in Rotterdam. Throughout his life, Tim has played a lot of different music styles, including tango, flamenco, Argentinean folkloric music, Brazilian music, Latin-American folkloric music, and classical music. His main priority is to show the versatility of the guitar in all music styles. To accompany soloists and singers, or to be a rhythm and groove section in an ensemble, but also to be a soloist in a broad variety of genres.

Next to playing concerts as a soloist and with ensembles Tim is also a guitar teacher covering various music styles. Tim started playing guitar at the age of 6 under the wings of Andrew Orme, and was taught about the foundations of classical guitar. After 6 years of classes with Orme, Tim switched to the Gitaarsalon in Enkhuizen. In the Gitaarsalon Tim had encounters with a lot of different styles, e.g. classical music, fingerstyle, Latin music, flamenco, jazz and tango. Here, Tim studied under the supervision of Pieter Nanne Groot. Together, they focused Tim’s classical repertoire, but Pieter showed Tim that classical techniques can be a foundation for playing other music styles! After meeting his former teacher at the conservatory (Kay Sleking), Tim chose to study South American music.

Tim is currently leading and working with various ensembles covering a wide variety of music styles. He has undertaken various musical journeys that included Argentina, Brazil, France, Germany. Belgium Portugal, Spain and even a tour in Guangzhou (China) with the Apacay quintet.

Gustavo Cabrera was born in Los Angeles, California and has a second nationality from Argentina where he has lived for 5 years. He has been playing the violin since the early age of 5
and has been classically trained showing as shown as the winner at a Public Radio Young Performers Concerto Competition in Illinois. After this motivating experience, he continued to win private scholarships to study in Illinois until also winning a Special Study Scholarship to study his Bachelor Degree at Millikin University in 2007. While attending there, he dedicated his focus in
Jazz until he moved to Buenos Aires, Argentina.
There he started to study tango and also continued his classical career while also touring Europe with the first serious tango orchestra in 2012. Every one of these professional experiences gave him yet more energy to focus his musicality in each style he had the opportunity to play in, learning more deeply with every inspiration.

After achieving his last job in a national tango/Argentinean symphony in Buenos Aires and playing with Leopoldo Federico and Amelita Baltar, he decided to move to the Netherlands in 2014 to pursue further studies in performance and composition. Once in the Netherlands he was immediately called by the ¨Seleccion Nacional de Tango¨ of Argentina to tour in Lisbon, Brussels, London and Istanbul directed by Cristian Zarate.
Later that year a composition for solo violin by Cabrera was discovered in a festival in L’Aquila, Italy and was invited to perform it for an eager and curious audience which of course led to also a tango performance. After this he decided to compose for solo piano for an international composition competition taking him to the final round in 2016 and to further inspiration. In 2017 he toured with Tango Tinto all over Italy and continues to perform all over Europe frequently. He is also a recently joined member of the renown DOT String Quartet dedicated mostly to the jazz
genre where you can see them perform in a few festivals during 2017. 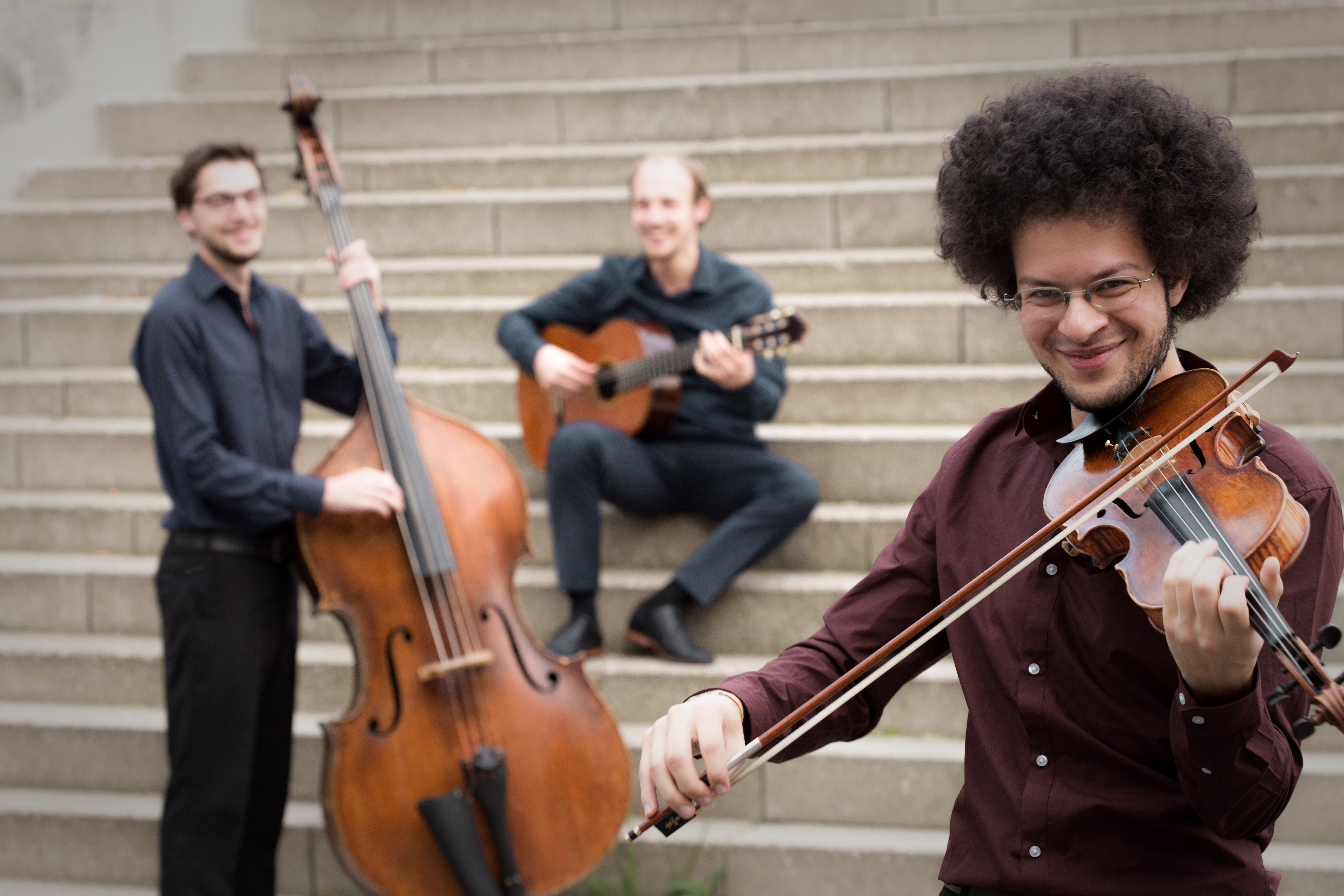 Born in Utrecht (Netherlands) in 1991, Alexander started his musical carrier with classical guitar lessons from Coen Beijer at the age of 5. He joined the Cathedral Choir School in Utrecht when he was 8 years old. Singing and voice building are central issues on this school. At the age of 8 he also started classical double bass lessons. At first with Chris Heilbron and later with Finne van der Maar. After two years of playing both the guitar and the double bass, it became clear that the double bass became more and more important for him, which made him join a youth orchestra in Utrecht. At this moment he stopped playing guitar.
When he was 10 he started to follow lessons with Peter Leerdam at the Rotterdam Conservatoire (now known as Codarts). First in junior class, later he joined the Havo voor Muziek en Dans (HMD). The HMD offers higher secondary general education combined with a preliminary specialist study for music and dance. Besides the normal Havo subjects the students follow music lessons during five years in various music disciplines from teachers of the Rotterdam Conservatoire.

At this time Alexander played double bass in various symphony orchestras like, Domstad Youth Orchestra, the preparatory orchestra of the Rotterdam Conservatoire and the Youth Orchestra of the Netherlands.
When Alexander was 16 years old, he came in touch with tango by joining the tango orchestra of the tango department of the Rotterdam Conservatoire, OTRA. When he started the bachelor studies at Codarts he then chose to follow classes in two departments. The classical department where he had his main subject lessons from Peter Leerdam, and the Argentinian tango department where he had his main subject lessons from Matthew Midgley. After two years of doing both studies he switched to a full-time study in the Argentinian tango department of Codarts and finished his bachelor in June 2014.
After his bachelor he decided to specialize further into tango by doing a master in the same department. In these 2 years he had his main subject lessons from Matthew Midgley and Jasper Somsen. In his time at Codarts he went twice to Buenos Aires, where he also followed lessons and masterclasses with great double bassists like Ignacio Varchausky and Juan-Pablo Navarro. He finished the master studies in June 2016. Over the years he joined and formed multiple ensembles, like LocosLindos, Nuevo Nocturna, Walton/vanDuinen, Orquesta Típica Mala Pinta, Tigual trio, Cuarteto El Compás, André Post Ensemble and of course, Roffa Tango Trio.